The young and eager students were shown how to use a magnetic lag sampler to separate magnetite from sand and were presented with rocks such as agate, copper ore, drill core, and petrified wood to examine through hand lenses, allowing them to see the patterns, textures and veins in the rocks.

Dr Brauhart shared his personal collection of rocks including clams, molluscs, and dinosaur hip bones and demonstrated to students the importance of a geologist’s work in determining the age and origin of rocks.

Magda said “This was a fabulous opportunity to show students how you can be a scientist who studies the Earth. We wanted our visit to be very hands-on and expose students to a rock culture that can be cool and help them to understand the importance of what geology actually is”.

“Students were pleasantly surprised to learn that geologists work in all sorts of environments around the world studying rocks and use devices such as rock hammers, chisels, and maps to conduct their work. They were extremely excited to see our principal geologist wearing the attire he works in when he arrived at their class”.

The class of seven year olds were enthusiastic to learn that some of the rocks came from volcanoes and dated back to 4.6 billion years ago when the Earth formed.

Dr Brauhart stated, “There is no way that I can actually imagine 1 million years, but geology gives us the power to understand 4,600 million years and how the Earth has changed over that time”.

The afternoon rounded off with students taking home, pieces of molybdenite and quartz crystals provided by Dr Brauhart, as well as CSA Global branded stress rocks and geology worksheets.

“It was an honour to share geology with keen and young students at a school that supports such a strong science program that is emulated state-wide,” said Dr Brauhart. 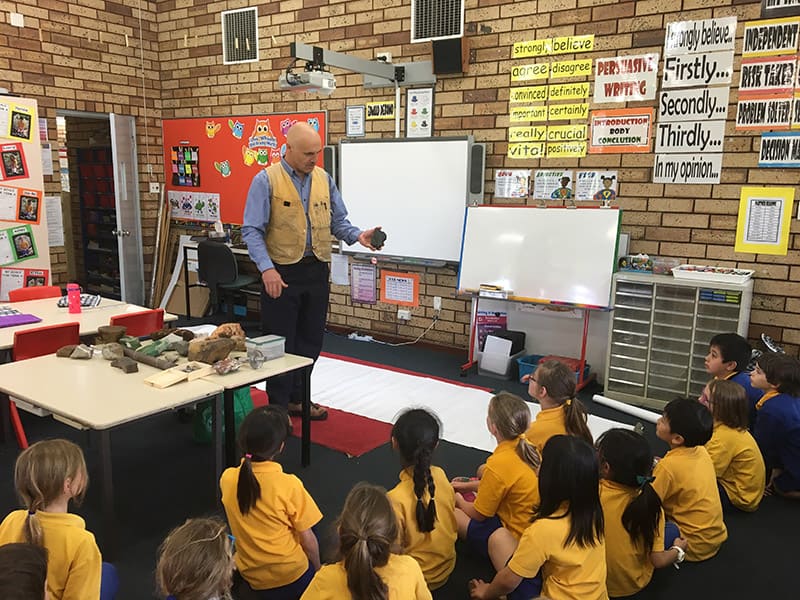