PERTH, AUSTRALIA – MARCH 7, 2018 – CSA Global announced The Joan Bath and Peter Howe Student Bursary for Advancement in the Mineral Industry at the annual PDAC 2018 Conference in Canada this week.

President of Americas, Stan Wholley stated: “It is with great pleasure that CSA Global, in conjunction with the PDAC announce the establishment of two bursaries with an aim to assist geoscientists and mining engineers. The two $3,000 bursaries will help to promote and support their education in Canada.”

The Student Bursary Award Program is open to tertiary qualified geoscientists and mining engineers, who possess three years industry experience and enrolled to undertake further study in the areas of economic geology or mining in the minerals sector.

The first Bursary is in honour of Joan Bath, an inspirational mining engineer from the company’s headquarters in Perth, Western Australia who has embodied excellence and achievement in the mining industry over several decades.

Stan stated: “Joan is a true pioneer for women in mining and was the first female to graduate as a mining engineer in Australia in 1974 and was the first to be employed as a mining engineer in industry and the first to gain a first-class quarry manager certification in the state of Western Australia. Through her hard work and dedication, Joan forced changes in thinking that made it possible for women to contribute to the mining industry.”

“Through her hard work, diligence, excellence and tenaciousness, Joan has carved out a highly successful career in mining. Her first role as a mining engineer was provided by Energy Resources Australia at the Jabiru uranium mine in Australia, and from there Joan established a strong career in mining in gold, bauxite and gold.”

Joan joined CSA Global in 2011 and has been instrumental in the successful management of numerous engineering studies in Australia and is actively involved with CSA Global internationally.

The second Bursary is named in honour of Peter Howe who founded A.C.A. Howe International in Toronto and went on to establish offices in the United Kingdom, Australia, South Africa, and Indonesia.

The company went on to become a leader in global exploration consulting and was responsible for several discoveries around the world, including the Bernic Lake Tantalum mine in Canada, Jabiluka Uranium Mine in Australia, and Mount Muro in Indonesia.

“Peter was a great mentor to many of his employees and associates, many of which are active and respected members of the exploration and mining community today. He assisted many people throughout their careers, and CSA Global honours his memory by creating this Bursary in his name and continuing his legacy,” said Stan.

Details of the application process and criteria for the Joan Bath and Peter Howe Student Bursary for Advancement in the Mineral Industry will be communicated by PDAC in coming weeks. 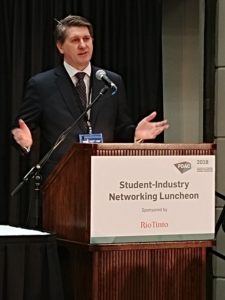