Introduction to valuation for mineral projects. Part I: Methods for valuating early-stage projects

This article series aim to present an introduction to commonly used economic methods for valuating mineral projects. It has been primarily based in a report written in 2010 by Swiss investment banking firm Basinvest whom main author is Svetlana Baurens. Part one of the article series aims to present traditional methods used for valuating early-stage mineral projects including the Appraise Value (Cost Approach) and Comparable Transactions (Market approach) methods. Part two will present economic methods used for valuating advanced-stage mineral projects (i.e. Prefeasibility-stage onwards).

Mineral assets are valued for a number of reasons, including mergers and acquisitions, non-arm’s length transactions, pricing of initial public offering of stock, support for property agreements, litigation, expropriation, and insurance claims. Exploration assets in particular are those on which an economically viable mineral deposit has not yet been discovered. Such assets are bought, sold, optioned and joint ventured on the basis of their perceived potential for the existence of a viable mineral deposit. The intrinsic value of an exploration asset is therefore based on the exploration potential. One measure of the exploration potential is the cost that can be justified to spend on exploration. In addition, the value of mineral assets is subjected to vary over time depending on events on neighboring projects, market interest, commodity prices, etc.

In particular, the Valuation of Mineral Assets (VALMIN) Code is a mandatory code for public reporting of technical assessments and valuation of mineral assets within the Australia region. VALMIN provides guidance on matters that may be subject to Australian regulations, other provisions of law and the published policies and guidance of the Australian Securities and Investments Commission (ASIC) and the listing rules of the Australian Securities Exchange (ASX). The VALMIN code is based on the principles of Competence, Materiality and Transparency and is written from a Minerals perspective as it uses terminology consistent with the JORC Code (Chen & van Olden, 2017).

This article discusses the Appraised Value and Comparable Transaction methods. The Appraised Value method is based on the premise that an exploration asset is worth the meaningful past exploration expenditures plus warranted future costs to test remaining exploration potential (Roscoe, 1998). The Comparable Transaction method estimates that the value of an exploration asset can be benchmarked against mineral project values established in the market. This approach can be contrasted with fundamental valuation approaches, where value is estimated directly from basic project information, the dominantly used method being the calculation of a net present value (NPV) from estimated project cash flows (Roberts, 2006).

Classification of Valuation Models according to type of Mineral Assets

There are three different approaches to valuation,

Production Assets are mineral projects that are in production.

The following table summarizes the three valuation approaches and their related methods and applicability for the three categories of mineral assets previously described.

Table 1: Valuation Approaches and Methods for valuation of mineral assets. Source: Redrafted from Canadian Institute of Mining, Metallurgy and Petroleum.

The approaches used to value a company depend on how marketable its assets are, whether it generates cash flow, and how unique it is in terms of its operations. There can be significant differences in outcomes, depending on which approach is used. This article will focus on valuation methods highlighted in cyan color in the table above, which are acceptable by the main Stock Exchanges (i.e. TSX, ASX.)

The following figure illustrates the application of various valuation methods throughout the project pipeline. However, it is important to note that mineral projects represent a continuum from early through late stage and therefore the transition from one method to another should demand a certain level of judgment. 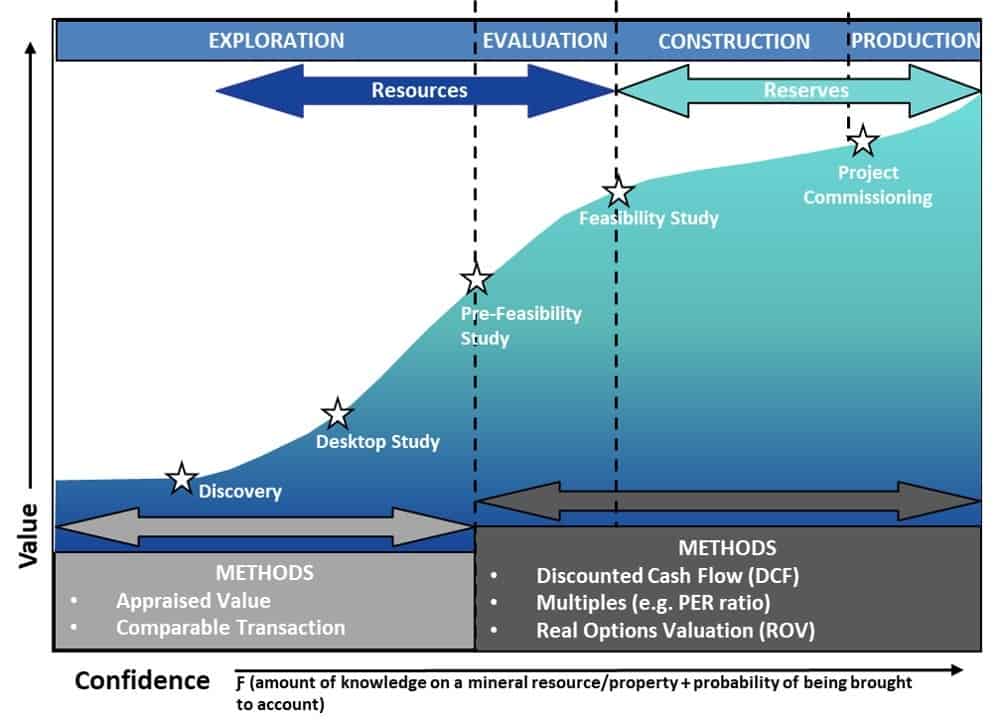 Figure 1: Valuation methods depending on the stage of development on the mineral property. Source: Redrafted from InfoMine MVENMYN.

The Appraised Value Method is based on the premise that the real value of an Exploration asset lies in its potential for the existence and discovery of an economic mineral deposit. The Appraised Value Method assumes that the amount of exploration expenditure is related to its value. Therefore, it is important to understand the definition of capital expenditure in mining industry (see Figure 3).

Past expenditures are usually analyzed on an annual basis, using technical expertise to assess which expenditures to retain and which to reject in terms of identifying remaining exploration potential. Usually little of the expenditures (≥ 5 years) prior to the effective valuation date are typically retained. In the case of dual or multiple property ownership, the Appraised Value of the whole property is determined first, and then the value is apportioned to one or more of the property owners. Under this method, a property is deemed to be worth what has been spent on it, with a premium, if results are positive, or a discount if results are poor.

If we are valuing past producing mines which have some usable infrastructure available, we should take into account what the replacement value of this infrastructure might be at today’s prices and accordingly add some premium to the value of the mine. Authors Ross Lawrence and Hrayr Agnerian stipulate that the accumulation of such expenditures should be restricted to the past 3-4 years, rather than to all historic costs, with the accumulation basis ranging from 100% positive results, to 25% for negative results but with some exploration potential, to 0%-10% with little or no potential.

The appraised value method is best applied to properties which are actively being explored. It is more difficult to apply the method to properties that have been idle for some years, especially those which have had substantial expenditures in the past.

The main disadvantage is that experienced judgment is required to separate the past expenditures considered to be productive from those considered not to contribute to the value of the property, and to assess what is a reasonable future exploration program and cost. This leaves the method open to misuse and possible abuse. Thus, it is prudent to compare the Appraised Value of an exploration property with values obtained from other methods, particularly those which use Market Approach.

Comparable methods allow the value estimated for a mining project to be benchmarked against mining project values established in the market. Comparable methods thus are a key tool for ensuring value estimates that are congruent with what the market would actually pay. The comparable transaction method uses the transaction price of comparable properties to establish a value for the subject property. The following table describes the main factors that determine of the value an exploration property:

Some of the limitations of the Market Approach include:

Comparable transactions are indispensable for valuing speculative and exploration properties, where there is not enough information to perform a reasonable fundamental NPV analysis. This method, when available, can provide a benchmark for development and producing properties when calculating the fundamental value of the asset.

To allow market values to be compared among projects, they are generally expressed (or normalized) as ratios of the form:

The table below summarizes the terminology typically used to distinguish between fundamental and market value, and between project and corporate value.

The principle is that in addition to value the projects held by a mining company, the market also takes into account things such as working capital, debt, hedge book value and other investments when deciding what to pay for a share in a company. When taking these considerations into account the market value has to be adjusted according to the table above. After the adjustment, the value of the mining project itself is isolated from the other assets and liabilities undertaken by the company.

A company’s net asset value (NAV) is calculated from the estimated aggregate net present values (NPV’s) of the company’s projects, by essentially the reverse back in comparison to the AMC:

Any of approaches should not be used as stand-alone valuations methods for any rigorous valuation of advanced mining projects or operating mines. By estimating both market and fundamental values for the comparables, rather than only the market value of the comparables, the valuator is able assess how the market is really valuing projects relative to their estimated fundamental value. Market and fundamental approaches can and should be combined into an integrated valuation procedure.

The Appraised Value and Comparable transaction methods have proven to be the most defensible and widely used economic methods for valuing early-stage mineral projects. Nevertheless, when valuating exploration properties and undeveloped mineral resources it is important that the valuation is examined from several viewpoints, as the fair market value will be apparent and circumstantial rather than a real value. Thus, the valuation should be a range of values, if possible, rather than an absolute, and should be time and circumstance specific. Moreover, the valuation is a subjective estimation and can be challenged. However, the fundamental feature in all valuation methods is the worthiness of future exploration. In other words, the cost and extent of an achievable exploration program is a measure of the esteem in which a property is held by others. Properties that are not explored do not increase in value unless mineralization exists in the property and the price of the commodity, or the potential of the area, changes dramatically. At last, valuations are affected by the country risk or maturity of a jurisdiction for carrying mining & exploration activities as well as available infrastructure (Thompson, 1991).

Chen Ivy, van Olden Karl, Quick Overview of the JORC & VALMIN Codes, and How to buy a Mine, presentation 2017.

Thompson I. A Critique of Valuation Methods for Exploration Properties and Undeveloped Mineral Resources, draft paper 1991.